I’ve been toying with rewriting my About page for a bit and crashed out in bed with a hangover as the Mediterranean sun seeps through striped curtains behind me seems as good a time as any. Writing about oneself is vanity but then, as one of my literary idols, George Orwell, pointed out, “all writers are vain, selfish and lazy.”

Which is as good a summation of me, after a fashion, as any, but there’s more. There’s always more. I write professionally, but more out of submission to fate than vanity (I think, anyway). I was a ‘good student’ and had every intention, right up to my second year of university, of getting a proper job. I was going to be a doctor. Unfortunately the only thing I had half an aptitude for was writing. Not coincidentally it was my one real pleasure. Hence almost a decade of flopping against the rain-slick deck of reality, doing almost anything that would put a steady income between me and what is all too clearly my destiny: obscure, impecunious freedom.

I ply my trade, for cash, mostly in the realm of music and travel writing. Though I adore music and travel neither quench my existential thirst to do something that matters. This treacherous task falls to my extracurricular activities – largely Irresponsibility (the quote, incidentally, is Germaine Greer). I’m not quite vain enough to imagine Irresponsibility is going to change the world, or necessarily even anyone’s opinion on anything, but it serves to get things off my chest. Creeping selfishness, see?

In my defence, it wasn’t my idea, entirely. Two people are mostly to blame for Irresponsibility in its current form. My dear friend, SEO Ibiza wizard Kev who read a couple of my old Blogger posts and told me I should keep writing. The other, Andy, got very drunk one night in South London and told me I was clever and if I didn’t “do something” with my life he was going to be angry with me. Whether or not he realised that was going to unleash this I don’t know; what’s done is done.

So that’s how I got here. The why is harder. Why am I incapable of reading headlines without yielding to vitriol? I suppose it’s because I disagree almost exactly with a friend who said to me, over a platter of snails and a bottle of good rioja, “I don’t read the news because there’s nothing I can do about it.”

When I stopped spluttering I managed to say, “Don’t you think that’s exactly why you should read the news? We’re lucky enough to live a safe, comfortable middle class lives. Don’t you think the least we can do for those who suffer is pay attention? Even if we can’t change the world, don’t you think they deserve to be acknowledged?”

Later, it occurred to me that was possibly coming on a little strong over a first course, but that – for better or worse – appears to be a fixed trait. I err on the side of outrage. This provides hours of harmless fun for my pals, who are amused at my Pavlovian response to any whiff of sexism/classism/racism/Catholicism/pro-capitalism/jingoism/conservatism… raised in jest or not. Perhaps I have a kingsize streak of self-righteousness where my sense of humour should be. But fuck it, who says I have to find any of it funny?

My self-imposed moral burdens stem, I guess, from unease at my privileges. I grew up in a town where getting high and getting pregnant were what passed for after-school activities. Like any escaped prisoner, I feel guilty. Especially because my bolt for freedom has taken me awfully nice places: an Ivy League university, London for five delightful years, now Ibiza.

I haven’t the answer, but am too afraid of being one of JD Salinger’s ‘good people’ (“good people who do not strive hard enough to uncover their own destinies and incessant responsibilities in life content themselves with parasitic occupations”) to stop looking.

Meantime, I write… and try in my haphazard fashion to follow the advice of Henry David Thoreau: “Let everyone mind his own business and endevour to be what he was made.” 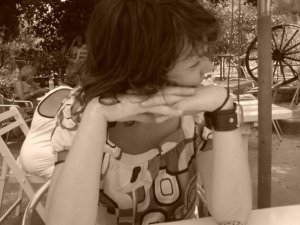