Buzz Bissinger and the Scarlet Letter 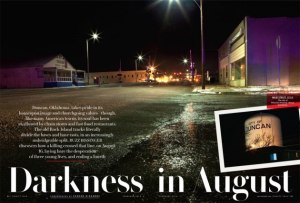 For the most part, Buzz Bissinger’s Vanity Fair feature on a murder in small-town Oklahoma, ‘Darkness in August‘ is a limp pastiche of Truman Capote’s seminal true-crime saga ‘In Cold Blood’. Hundreds, probably thousands, of lesser lights have cribbed Capote’s singular style, so Bissinger’s attempt is hardly newsworthy.

What is remarkable is his rabid classism and misogyny. Writing of one of the teenage suspects he says:

He had gotten his girlfriend, or she may have been his fiancée, pregnant. She proudly posted pictures of the ultrasound as if two teenagers having a child, with the father demonstrating no visible means of support and known to police, were a good thing.

One word leaps out: proudly. Bissinger doesn’t simply state that “she posted pictures” but calls her proud. The tone is editorial, judgemental, nigh on Biblical. We all know what goes before a fall, right?

The next line reveals why Bissinger feels entitled to his outrage: the father demonstrates “no visible means of support“. The issue here isn’t the father’s alleged participation in the crime, which happened later, but the simple fact that he is young and impoverished. In America, being poor is the unforgiveable sin (especially for journalists who endorsed Mitt Romney).

Weeks later, the young mother attends court. He writes: “She had given birth two weeks after the arrest. It wasn’t hard to find out about. She had proudly showed off pictures on Facebook.”

Again, the word proudly and Bissinger’s disgust oozing off the page. It’s hard to tell if he is angry with her for having the audacity to procreate, or if his ire is raised by her poor taste in men.

If the former, he needs to grow the fuck up. He may not think teenagers should have babies but A) who asked him? and B) what does he know about her life? Who knows what tangled web of education, emotion, indoctrination and healthcare access led to her pregnancy. That isn’t what the story about and it is none of his goddamn busines. Given that she did get pregnant, why shouldn’t she celebrate the most momentous event of her young life? Surely it is healthier for her to embrace motherhood than to be covered in shame.

Bissinger also seems to think she should cast into outer darkness for choosing the wrong boyfriend, which is breathtakingly absurd. Everyone goes out with douche-bags when they’re teenagers. It’s nature’s way of ensuring you don’t marry one down the line. If anything, she deserves a double dose of love and compassion for having the misfortune to be tangled up with an alleged murderer. Nobody wants that. Nobody wants to go to court to see the father of her child. Nobody wants the inevitable conversation when that child is older.

Bissinger should be ashamed. Next time the Pulitzer Prize-winning author and Ivy League university graduate wants to pick on someone he should find a better target than a poor teenage mum from Oklahoma.

2 thoughts on “Buzz Bissinger and the Scarlet Letter”