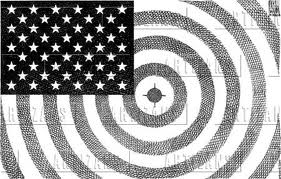 Forget apple pie, baseball and flagwaving: random mass murder is the the true defining characteristic of America. A Denver, Colorado shooting left at least 14 people dead and 50 wounded after a gunman walked into the midnight showing of Batman – The Dark Knight Rises and opened fire. This raises the usual questions about why the nation has its head so far up its collective ass that continues to embrace the self-defeating absurdity of the “right to bear arms”. But it is this comment that bears a closer look: “The FBI, which is working with the police, say there is no terrorism link”.

Being used for live-ammo target practice while catching the latest popcorn flick sounds pretty fucking terrifying to me. Is the FBI suggesting that random killing is fine, provided the perpetrator doesn’t wear a turban? How breathtakingly stupid; and how sad. Are the friends and families of the victims supposed to feel better because it wasn’t “terrorism”? Tragedy is tragedy. The suggestion that this is somehow more tolerable, or less hideous, because it hasn’t been rubber stamped as “terrorism” is plain insulting.