Support Mary on the Green 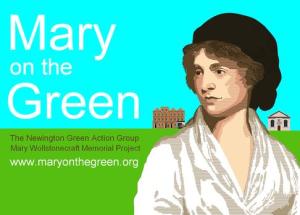 High on my list of favourite feminist books is Mary Wollstonecraft’s A Vindication of the Rights of Women. Clear, succinct and utterly even-handed, the book – published in 1792 – was a good two centuries ahead of its time. I knew very little about Wollstonecraft, however, until I happened on the news that a charity called Mary On the Green is fund-raising to build a memorial to this illustrious woman in Newington Green, London, where age 25 Mary founded a school. Please check out Mary On The Green and Tweet, ‘Like’ or otherwise support the project. For more info check out the terrificly informative A Vindication of the Rights of Mary.

This bio excerpt from the Mary On The Green site explains what the fuss is about:

When she was 25, Mary set up a boarding school in Newington Green, then a village a couple of miles north of the City, now part of London itself. This enterprise allowed her to rent a house and make a home with her best friend and with two sisters, one of whom she rescued from an abusive marriage. It also allowed her to mix with a group of Rational Dissenters, high-minded non-conformists who stretched her spiritual and mental frontiers. The Green itself remains, as does Newington Green Unitarian Church, still radical, where Mary heard sermons that changed her life. The people who gathered around its minister, Dr Richard Price, contributed to the intellectual milieu that shaped Mary: Benjamin Franklin, Thomas Paine, Joseph Priestley, and the second president of the United States, John Adams, and his wife Abigail.

The experiences during Mary’s years at Newington Green led her to write her first book, Thoughts on the Education of Daughters. She was an inspiring teacher and an innovative educationalist, arguing for equal education for girls and boys, drawing out children’s spirit and curiosity without stifling them. Later, building on the contacts she had made through the Dissenters, she created a career for herself as a writer, one of the first women to do so, starting off with reviews and translations.

When Edmund Burke attacked her mentor Dr Price, she responded quickly with A Vindication of the Rights of Men, in support of what we would now call human rights, in the context of the French Revolution. This work made her an intellectual celebrity, and a year later she followed this up with A Vindication of the Rights of Woman, one of the earliest works arguing the essential equality of the sexes.