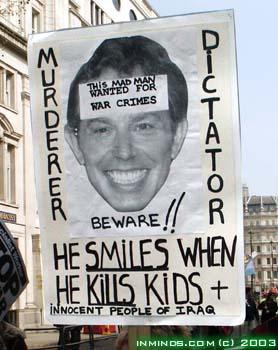 Up till now, I thought Tony Blair is merely an odious, scum-sucking, onanistic arsewipe. But apparently he is a complete moral vacuum. In an interview in the Guardian to promote his memoir, A Journey, Tony is happy to own up to (some) mistakes:

The fox-hunting ban. Was it a mistake? “I think yes on balance it was in the end. …I didn’t quite understand, and I reproach myself for this, that for a group of people in our society in the countryside this was a fundamental part of their way of life. [It] not one of my finest policy moments”.

Yet he refuses to apologise — in print, or anywhere else — for the lying, cheating, hell-loosing decision to join the blood-for-oil fest in Iraq: “I don’t seek agreement,” he writes. “I seek merely an understanding that the arguments for and against were and remain more balanced than conventional wisdom suggests.”

In other words, Blair’s moral compass is so peculiarly calibrated he can understand, and empathise, with the point of view of a bunch of long-faced toffs addicted to chasing foxes. He cannot, however, bring himself to acknowledge the anguish of the families of thousands of dead soldiers and hundreds of thousands of murdered Iraqi civilians. Maybe Blair’s fresh take on the fox-hunting ban comes fromo seeing Iraq the same way hunters see the countryside — as a pest-ridden problem to be solved.