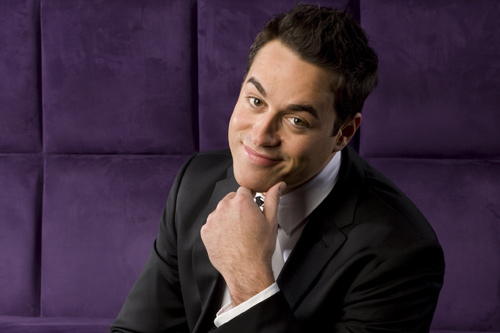 I have seen my share of ghastly television, but for sheer can’t-prise-my-peering-eyes-from-the-telly-nor-stifle-my-howls-of-anguish VH1’s alleged dating show Tough Love takes the chocolate chip biscuit. “Alleged” because Tough Love is to ordinary dating shows what H-bombs are to BB guns.

The premise is Master Matchmaker® Steven Ward, with a little help from Matchmaker Mom JoAnn, oversees a houseful of love-hungry laydeez who, with the help of his Tough Love, are going to turn themselves into shiny, desirable sex toys for some lucky dude. Terrifying as plot is, it has nothing on the spectacle of tough love in action. Steven is a perky, foul-mouthed Drexel econ grad with a nice line in flat-front trousers; a small, glossy Jewish version of Gordon Ramsey. Only you’re his nightmare, sister. 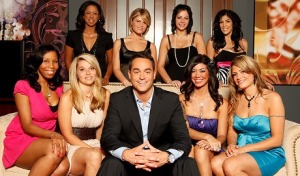 Steve and 'the girls'

Steve prepares his crew of lovelorn eccentrics, including Rocky, the trout-pouted stuntwoman with 32 pets; Kanisha aka “Miss Gold-Digger”; and Taylor, who is basically a walking boob job with attitude, for finding TWUE WUVE with a combination of relentless bullying and glib promotional babble worthy of a sales conference, or a 12-step meeting in hell. He constantly exhorts the women that negativity is bad, positivity is good. At first his patter is irritating-but-harmless. The longer you watch Tough Love (and it is as addictive as meth laced with E-numbers) the more truly creepy it gets.

Every week Steve singles out a ‘girl’ to publicly berate in what resembles nothing so much as a communist brainwashing session. The others, urged to add their criticism to this queasy ritual, are routinely reminded it is for the victim’s own good. When Jenna, a former fatty with an pug face and a penchant for self-dramatisation, hits the hot seat in Episode 5 she goes into teary meltdown as the girls take it in turn to accuse her of not “taking things seriously” and – that worst of all female crimes – negativity. It is a Stasi-worthy performance.

Ward cheerfully owns up to mixing ‘help’ and manipulation, saying:

It’s been very fun because I have been able to pull all the strings. And have been like a master puppeteer…. being able to put these women into position to be successful and then to also to be able to set them up for failure, it gives me an incredible amount of power over their lives.

Not quite the caring attitude one might hope for from a love doctor. Love’s got nothing to do with it, however, at least not in any recognisable sense. The women are serviced with a rotating cast of blank-faced, 20-something men (aspiring actors?) Presumably they, too, are on the search for true love, but they aren’t held up for scrutiny. The men are there to judge. For women, his message is: “It isn’t about you. It’s about what they want” so…

1) Put yer ya-yas on display – in Episode 3 they are ordered to do a ‘sexy’ photo shoot, and chastised for being insufficiently hot.
2) Clamp a grin on your face and be positive at all costs.
3) Never do or say anything a man might not like.

Terrific advice if your ideal bloke is someone looking for a blow-up doll with a pulse, otherwise deeply disturbing. First, because in this equation it is always – and exclusively – the women who are paraded like livestock. Steve occasionally asks, ‘did you like him?’ But the woman’s answer is unimportant, as demonstrated in Episode 5, where he basically told two of the girls they were stupid for not fancying his choices for them. All Steve cares about is how they appear to the men; whether or not he’s broken them down enough (his phrase, not mine) for beady-eyed sexual opportunists to consider them boffable. Second, because it offers as gospel the truly depressing notion that love is a commodity. If you don’t have any, it’s because you aren’t offering the right currency. The Tough Love mantra is that finding a meaningful relationship is a matter of making sure you fit all the criteria, of ticking the boxes and double checking your inventory. If you don’t have love you are obviously doing something wrong and don’t deserve love until you’re ‘fixed’. If that isn’t an ethos to make you slit your wrists, I don’t know what is.