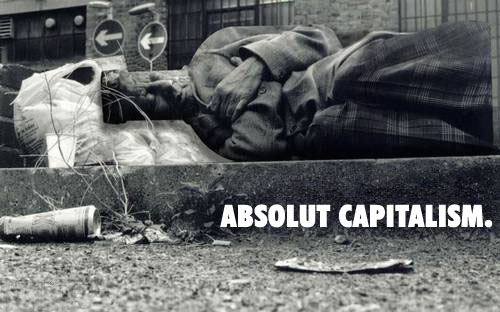 A Salem News column on value got me thinking about the problem with capitalism. Proponents argue, rightly, that people are more motivated in a system where individual effort results in tangible individual reward. In that respect capitalism is clear-eyed: human beings are basically selfish. Even the most magnanimous-seeming social structures (like the nomadic Native Americans described in Erik Erikson’s Childhood and Society) evolve to sustain the individual. Greater love hath no man than to lay down his life for a friend precisely because our biological imperative is animal selfishness. Where capitalism goes awry is in thinking of reward in a purely material sense. It only understands individual betterment in property terms. The very idea that holding property is inherently more desirable than not holding property is classical-capitalist to the core.

This is not natural or inevitable. It is a product of a flawed value system that can and must be changed. People only believe that their individual worth is intrinsically linked to their bank balances because they’ve been taught to believe it. A better, more functional system – one which wouldn’t rely on over-production, mass consumerism and the boom-bust market cycle – would recognise what we currently consider the “intangible” rewards of endeavour as actual awards. Under the existing regime a first-rate mechanic’s successful car repair has no value until he gets paid for it. Likewise, a beautifully-cut dress is of no value unless some corporation purchases the design and mass-produces it for mass-consumption. A hand-written note has no value because no one is paid for its production. And so on. The majority of the things we really need, the things that raise our lives above the level of Hobbesian gloom, are ‘worthless’ under the current system. No wonder people are depressed.

Out of torpor, lack of imagination or simple blindness, we soldier on. Some people tackle the business of making a living from what they love. It is a good impulse, but still a basically backward approach to the problem. Rather than turning what we love into money, we should order love and money correctly in the hierarchy of human needs. It is a Utopian task, but not impossible. (Anyway, what the fuck is the point of undertaking non-Utopian tasks? Why waste your energy fighting for something less-than-wonderful?) All it takes is to define, the thing itself as having value. It is a simple matter of semantics; an act of will. Our current socio-economic system was built on words and desire; it can be as-easily rebuilt. We must reassign value.

In this brave new world the smooth-running engine, the well-crafted phrase and the graceful sweep of a gown are inherently worthwhile. The financial consideration in rewarding the person who accomplished these tasks should be incidental and unimportant. If possible, dispensed with altogether. Then the reward for individual effort becomes the thing itself. The satisfaction of creation, the feeling of agency. It is wrong that a master craftsperson can achieve something unique and beautiful, yet feel worthless because no-one has deigned to assign a cash value to their creativity. Under a properly-run system of “capitalism” the capital accrued is personal satisfaction.

Forget the “need” for money. Correctly run, society can function in socialist-capitalist harmony. People, rewarded by the social importance placed in their creativity, will produce according to the idealised model of capitalism, that is always seeking to improve their product. Meanwhile, the government, need no longer expend energy on bullying its citizens into consumerist slavery, can devote itself to administering a social system that provides for the well-being and security of the state without interfering excessively in the private lives of citizens. Without the artificial socio-economic divisions driven by greedheads, people’s basic needs could be met with far less expense and effort than they are currently. Banning private home ownership would instantly eliminate the ruinous pressure to ‘get on the property ladder’. Long-term lease arrangements, rather than outright ownership, should be standard practice for anything that currently requires heavy credit to finance (e.g. cars and houses). Critically, all education, including higher-level, must be free and accessible. People must have ample opportunity to discover and develop their unique talents – otherwise the system doesn’t work. This means changing child-rearing arrangements and redefining ‘adulthood’ in non-economic terms. It means tearing up the current education system and breaking its cast-iron links to the industrial economy. It means rooting out our snobbery about various forms of creativity and replacing it with an all-inclusive ideal. It means understanding that a rubbish collector is as essential to society as an actor; a cleaner as valuable a person as a mechanical engineer. From that plane of wisdom, progress is possible.